OK, I have some bad news. The bees in my hive are no more. Wax moths, the evil little things, killed off all of my bees, and destroyed the hive in the process.What we thought happened was, that the queen probably got killed somehow, and the hive became weak. That just gave an opportunity for the wax moths to take over.  It is so sad to have a whole colony die out like that. 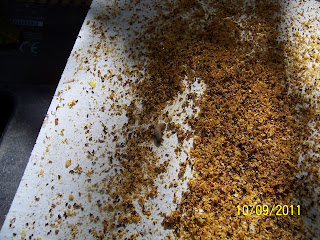 This is the bottom board, covered in who knows what, and the little nasty larvae. When we pulled it out, the whole pile of mess was moving, infested with little larvae like this. Ooh I have the heebie jeebies! 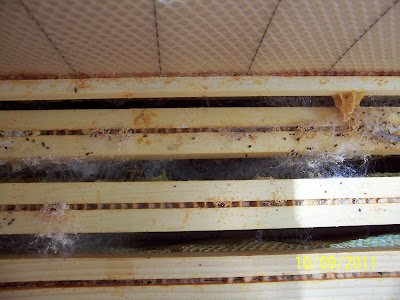 We have read, instead of just cleaning up the frames, you just need to burn them and buy new ones. So, that is what we plan on doing. We don't want to doom the next colony by not cleaning up all of the eggs and such.

But, we are not going to let this stop us! Its a learning process, and we already have another order in for a bigger package of bees this year, we will try it again!

On a Happier note, Dad's top bar hive bees are doing wonderful! No Problems at all!
Posted by Sasha at 11:34 PM No comments:

Hi There! I know its been a while, so here is a good post I promise!

For all of my life I have heard my dad talk about Mom Cox's fried apple pies. She was my great grandma, and as dad says, made fabulous apple pies from the tree in their yard. The pies were made with dehydrated apples, re hydrated, ... cooked in sugar, rolled in flaky dough and deep fried. Sounds good huh? Well I had never had them, and we didn't have her recipe. But they sounded really good, and I wanted to try them.

So I went on a mission to find a recipe that sounded similar to the description I was given, and try to duplicate it. I tried the first recipe I found...... WOW, they were great. That recipe is going in my collection for sure! It isn't the same as Mom Cox's but they are still very tasty.... mmm
In fact, I like the recipe so much I think I might share it with you guys :)

Here are all of the ingredients you need 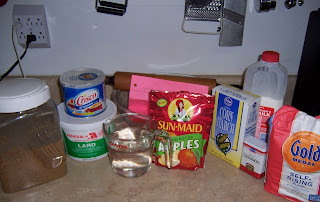 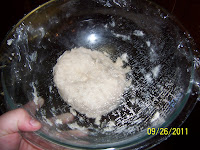 The dough is just a basic biscuit dough. Cut the shortening into the flour with a pastry blender, or two forks, until it is crumbly, and resembles a coarse meal. Then mix in the milk just until the dough comes together. Try not to work it too much, the more you mess with it, the tougher it gets. Cover in plastic wrap and put in the fridge for now. 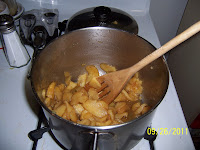 Now cook the apples in the water until re hydrated and tender. If there is still too much water in the pan, you can drain some off, but SAVE it in a separate bowl. Add cinnamon, sugar, and brown sugar to the apples, until it tastes the way you want it. To thicken the filling take your apple liquid you have set aside, and mix some corn starch in with the liquid. Then add that liquid back to the apples a little at a time ( a teaspoon or 2) Heat the apples back up to make the filling thick. 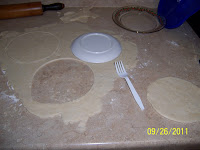 Now get your dough back out, and roll it out very thin. Take a small saucer and cut out rounds. Place a spoonful of apples into the middle of the round. Fold over and seal with a fork, poke the tops of the pies a few times. 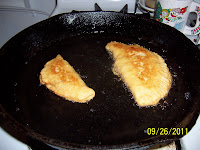 Drop each into hot lard, and cook until brown, flip and brown on the other side! :)

There you have it, Fried Apple Pie! 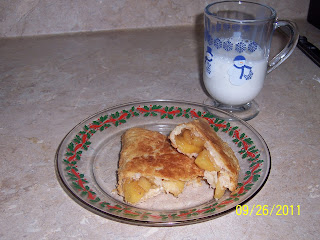 What to do with 50 Pounds of Peaches... jam anyone?

I Know it seems like a lot, but its worth it to have sweet canned peaches, and peach jam all year long!
Our friend Rick picked us up two 25 pound baskets of peaches from Jungle Jims . (if you haven't been there.. you should go, its awesome!) Each basket was $17.50 which ends up being around 70 cents a pound. Not too shabby at all!

What we did with most of them was canned them sliced in a light sugar syrup, but that's another post. The rest of them we made into yummy peach jam, about 3 batches worth.

The peach jam is pretty much the same as any other jam. Just sugar, fruit, and pectin. The recipe we used called for 4 cups of fruit, 5 1/2 cups of sugar, and one box of pectin. The recipe also called for lemon juice, but we left that out. So first peel, and pit the peaches, then dice them up into small chunks. Put the fruit and the pectin in the stock pot, bring it to a rolling boil. Then pour in the sugar. Bring it back to a rolling boil, and boil for one minute. After that it is ready to put in your jars. It gets processed in the Water bath canner for 10 minutes. We made a quick video showing the steps in more detail below.


We only shot a video for the peach jam this time, next time we can peaches we will put up a video of that too:) Hope you enjoy! 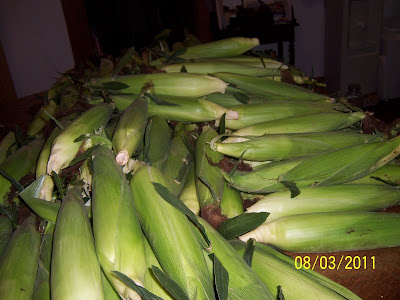 Yep that's right, we bought 10 dozen ears of corn from the town farmers market this week. And we plan on buying at least 10 more the next time he has it. We usually get enough corn to last us until the next year, when we can buy more.

The type of corn we get every year is called Serendipity, it is a bi color sweet corn. And it is so sweet, that it tastes like sugar has been added to it. It's fantastic, I love it!

What we do to store our corn for the year is freeze it, One year we tried canning it, but it doesnt have quite the same texture that we like, so in the freezer it goes. First thing we do is shuck it all( I know... Thats a given). We use laundry baskets to hold it all in, because its the easiest thing to carry them in, and all the husks to the garden. 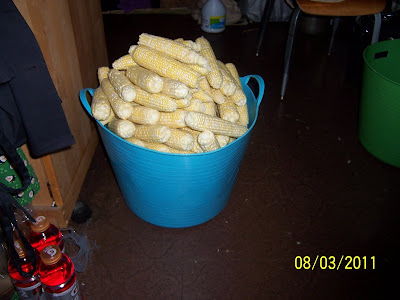 After that, we take them all to the kitchen, rinse them off, and start cutting the corn off the cob. We also like the pulp stuff left on the cob after cutting the kernals off, so we scrape that stuff into the bowl too. Then 3 cups of corn go into each quart baggie, and we throw them in the freezer, thats it!
And then of course we have to tie up the cobs in multiple trash bags, and boxes or else HE will eat them all! He looks so innocent right? Not :)﻿ 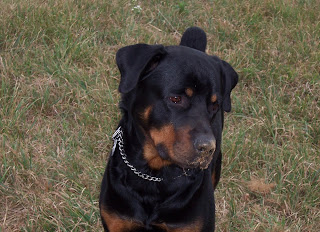 First Blackberry Jam of the Year 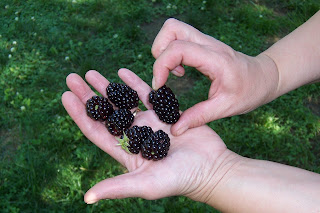 Boy our blackberries are huge this year. We have gathered 12 or 13 pounds so far, and a few cuts and scrapes from the thorns. The berries are well worth it though. With the first few pounds we made 2 batches of jam. Its something sweet and easy, and you can enjoy the summer harvest, all the way through the winter and until you can make some more next year.

What you need to make the jam is,
1 box of Pectin
5 cups of blackberries
7 cups of sugar

First you need to crush the berries, we sieve about half of the seeds out, you can have more or less seeds depending on your preference. Put
the 5 cups of berries into a stock pot along with the box of pectin, and bring it to a full rolling boil, once it has reached that point, pour in the sugar, and bring it back up to a rolling boil, and boil for 1 minute. That's it for the jam! See, so easy! Now you just ladle it into your sterilized jars, and process the jam for 10 minutes in a water bath canner.

Here is the video we made showing the whole process from start to finish. Sorry for the long video, I just didn't want to edit any important information out of it, that you all might need. Anyway enjoy our video, hope it is helpful!


We're not sure what we will do with the rest of the blackberries we pick, make some more jam probably, then eat the rest :) yum
Posted by Sasha at 1:31 PM No comments:

Boy is it hot this week! So I decided to pretend it was cooler weather, and post about making candy.

This video was taken a few years back of our family friend Ernie. He makes the worlds best Peanut Brittle. It is fantastic let me tell you, I have ate enough to know :) His recipe and method are really easy so you should try it this winter... or ...you can put on some Christmas music and pretend, like me :0D (I'm dreaming of a white Christmas, Just like the ones I used to know....)

Well I'll just let him tell you the rest! Enjoy!

Canned Chicken is so useful! I Love it!

So at our local grocery store we found chicken for 1.99 a pound. Around here that is pretty cheap, so we decided to buy some and jump in to the adventures of canning meat. Canning meat isn't nearly as hard as everyone thinks it is, and trust me it is well worth your trouble. You can use it in so many things, and it isn't taking up valuable freezer space.

You can use the Hot pack method, but we decided to go easy and use the Raw Pack. First you cut up the chicken into squares, about kabob size as mom would put it.  Then pack it into your sterilized jars, in this method, there is no need to pour broth or water in the jars, the chicken makes its own broth as it cooks. Make sure there aren't air bubbles, and the rims are wiped off, the whole nine yards, then set the jars in about 2 inches of water in the pressure canner. Lock the lid and let the steam vent for 10 minutes then close the vent and process at 10 pounds of pressure for 1 hour 15 minutes for pints, and 1 hour and a half for quarts. Oh yeah, and if you are worried about the hard water stains on the canner and the jars, put some vinegar in the water, that should do the trick.

The best part about having the canned chicken around the house is all the things you can use it for. We make chicken salad, chicken fettuccine Alfredo, chicken and ramen, just about anything! It is so versatile. To use it for baked things, just use in the recipe, but if you are eating it cold, like chicken salad, cook it ten minutes first, then cool it down. Cooking it first is just an extra precaution to make sure all the potential bacteria and things are killed. Just to be sure.

Anyway we made a video, and tried to describe the important things as best we could, to keep everything safe for eating. Hope it is as informative as we meant it to be :) Enjoy!